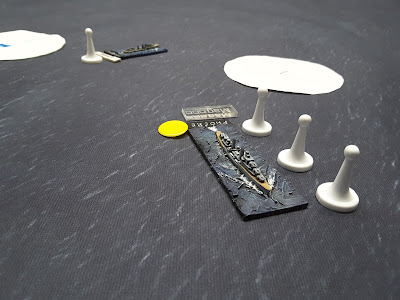 It's that time of year again when we go all Nautical on you here at YG. A little bit of Naval Wargaming goes a long way and with periods a many and time short it's always been a tradition here to get at least one decent crack at some seaborne action around Easter time.

I had decided on a theme for this set of games a while back but with the games being based on a historical action I didn't want to give the game away too soon. So before we began neither team knew what war they were in never mind what ships they had. So you know more than the players from the post title !

So if you fancy playing along don't read on ! You definitely need an Umpire for these games to keep the facts from the players. With that in mind I have put the historical background at the end of the post with the Umpires notes.

We use a set of rules I wrote going on 30 years ago and all the scenarios are played on a 12 x 6 table. However with the additional information in the Umpires notes the Campaign should work with any rule set.

The game takes place at night so you will need to use suitable mechanisms from your rules to simulate that.

It’s early 1941 and the war in the North Atlantic is in full swing. Operatives in Europe have reported a number of “large” German ships leaving port and heading for the open sea.

Intel is vague but the source is credible, the Admiralty are convinced that the Germans are up to something and have sent forces to sea across a wide area in an attempt to locate these ships.

You are in command of a small squadron consisting of the Light Cruiser Phoebe and two Tribal Class destroyers. Nearby you have the Battlecruiser Repulse and 2 further Tribal Destroyers in support.

Your Mission is to locate and identify the ships not to become heavily engaged.
It’s dark and damp when at 01.00 hours you become aware of a contact on your starboard bow. 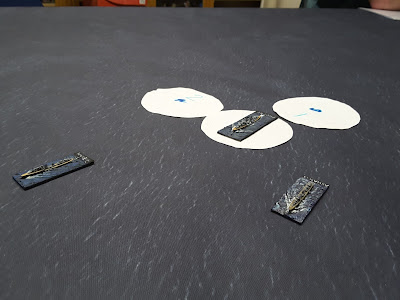 The Furher has given you his personal blessing in this most important mission, you are to take the Battlecruisers Scharnhorst and Gneisenau into the North Atlantic and cause as much havoc in the shipping lanes as possible.

Once you pass Iceland you are on your own, reliant on oilers to keep you moving you must avoid heavy action with other Capital Ships as repairs at sea are your only option.

U boat wolf packs are operating in the area and you may receive some support from them during your Missions.

As far as you are aware the British don’t know you are at sea. It is essential that you do not reveal which ships you are commanding to the British, the umpire may place other ships on the table, go with it.

It’s 01.00 cold, dark, damp. You are to the east of Iceland with two Narvik Destroyers in escort and these are due to turn for home soon, you have a contact bearing North to your front.

See the British off before proceeding into the open ocean.

The German ships should set up in the corner of the table, the two main ships in line astern with the two destroyers screening in front. As it's dark ships should be represented by numbered counters, the Germans have two extra false counters to place in the screen.

The British Light Cruiser force set up at maximum gun range for the Light Cruiser away from the German destroyer screen. The British Battlecruiser is as far away as it can be from the Germans patrolling the far table edge. Again all ships are represented by numbered counters. These remain inactive until a German ship is spotted.

One of the keys to the start of Campaign is the British uncertainty over the identity of the German ships, there has been no positive identification at this point and the available Intel is vague. So the following rules are in place,

Each time one of the German "big ships" are illuminated roll 1 dice per ship per turn, to begin with 1 d8.

When the ship is "identified" place a relevant ship model on the table..


Roll again the next turn and use that roll as the "identification" for that turn. So for example, in turn 1 a star shell illuminates a German counter, the British player rolls a 7 for id and believes they have seen Tirpitz, the following turn the ship remains illuminated and the British player rolls again, this time it's a 3, the observer checks his Janes Fighting Ships and believes he has seen Admiral Scheer.

Once a counter has been identified as one of the choices twice then that choice is either ruled out or in the case of 5/6 it correctly identifies the ship. So in our example above if the ship was illuminated for a third turn and the British player rolls a 7 again it would be identified as Tirpitz again which would rule out that for the next turn so that the next roll would be on a d6 (three valid selections left). Two successful rolls against Scharnhorst would positively identify the ships correctly.

As an Umpire it's a joy to watch the British scratch their heads when the first ship change happens.

The German Destroyers are identified on their first illumination, the blank counters are removed.

The Campaign is based on Operation Berlin the raid by Scharnhorst and Gneisenau, after a failed attempt to sail in December 1940 (due to a storm) both ships sailed from Kiel on the 22nd January 1941, they were spotted by an agent in Denmark and the Admiralty warned. Ships were despatched but the main fleet were stationed in the Iceland Faroe gap, the Germans spotted a couple of cruisers in that area and headed for the Denmark Straight instead.

Our first scenario is loosely based on this first contact, the ship involved was HMS Naiad, the captain concluded his sighting was merely an illusion and decined to shadow the ships. I changed the ship to HMS Phoebe (same class) to avoid the players guessing the real events portrayed in the game. The Germans also didn't have a Destroyer escort but I added one to make it harder to id the main German Ships.

If Scharnhorst and Gneisenau are engaged in main gun combat it's up to the Umpire to monitor any damage / hits to prevent identification by shell weight etc.

The game should easily completed in a club night. The Germans will disengage if they are threatened a Torpedo attack or  come under accurate fire from the British Battlecruiser.

How did we get on.

A good little introductory scrap for our first game. The British set off quite boldly towards the unidentified markers and it wasn't long before starshells were in the air and the Destroyers had identified each other and had engaged in combat. Narvik vs Tribal is a decent match up but luck was not on the side of the British, early on HMS Nubian disengages with a bridge hit leaving the British outnumbered. 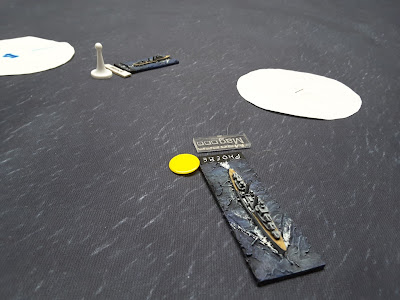 The German Destroyers weren't being shrinking violet either, they had got close enough to illuminate HMS Phoebe with search lights giving the big German ships a target. No luck here either, the first shot effected it's Magazine, no explosion thankfully but it left the Light Cruiser down to 3 rounds of Ammo.

The advantage of using your searchlights is seeing other ships, however it also means everyone can see you ! HMS Phoebe and Z23 sank in a short space of time but for the German player a LC for a DD is a decent trade.

Just as those ships sank the British Battlecruiser Sqn came into range and things got a bit more exciting for the Germans, a late attempt at a Torpedo attack by the last remaining Tribal Class destroyer was scuppered when it suffered a rudder hit.

So at the end of the first game both sides had taken casualties. The British had not yet positively identified the German Raiders, the Germans were out into the Atlantic and the chase was on.
Posted by Yarkshire Gamer at 11:41:00