Floating (in the most peculiar way)


This is a continuation of the X Wing Campaign, full explanation and details of Campaign rules are here. 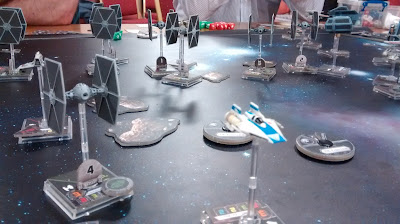 A few moments ago we received a distress call from your fellow rebel pilots over at the 423rd X Wing Sqn, the remnants of their ships have hidden in an asteroid field following an encounter with an Imperial Star Destroyer.

As they entered the field they were targeted by an as yet unidentified weapon believed to be some form of giant Ion Cannon. The ships are trapped in the field and their R2 units are trying to repair the stranded X Wings systems.

Protect your fellow pilots from any Imperial attack and see them to safety.

Rick O'Shea spent some GCs on an Engine Upgrade.
W K Jnr made the leap to PS2 and added a shield upgrade. 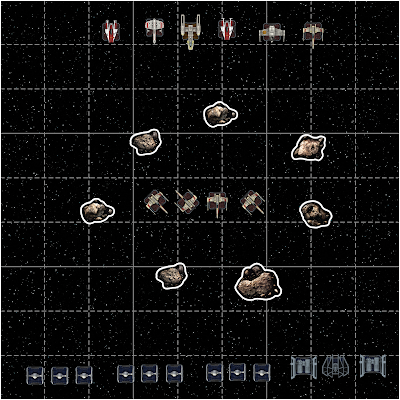 Rebel players set up on the top of the map within range 1 of the table edge. The stranded X Wings set up in the centre of the table (a 2 straight move apart). Start with 1 X Wing and then add 1 more for each two rebel players. Random PS skill either 2 or 4. Roll a d12 for their direction of facing.

Take 7 Asteroids and randomly place them around the X Wings.


Empire set up range 1 from table edge. 1 Tie per Rebel ship and 1 special ship per 3 Ties. As usual every third tie is a random named pilot the rest are random sqn pilots. We ended up with 2 x PS 1, 4 x PS 3 and 1 x PS 4. Named pilots Howlrunner, Mauler Mithel and Dark Curse. Along with that we had a Tie Defender (Sadly PS 1) and two Tie Bombers (PS 7 and PS 4).

Game lasts until the Rebel X Wings either escape or are destroyed. 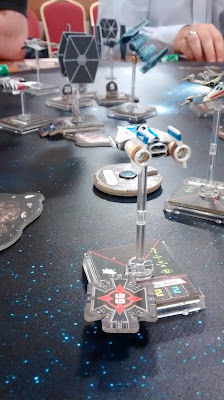 The ships can only move using a 1 or 2 manoeuvre from their dial until they are repaired.
Until repaired the ships must roll a pre attack dice before they shoot, if they roll a hit the weapons power up and work, any other result the weapons don't fire.
At the end of each turn roll 3 attack dice for each of the X Wings you need 3 criticals to repair the ship, carry over criticals from previous turns.
Once repaired the ships act normally however they may now exit the rebel table edge to get to safety. 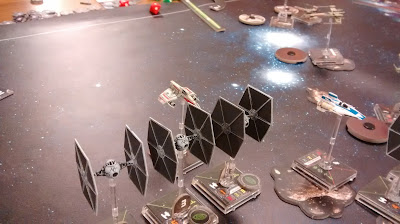 It was our regular five players tonight along with a welcome return in his A Wing for Captain Tangent, 8 missions in he still hasn't shot anything down.

Lots of ships on the table as well, 12 Imperials and 10 Rebels plus 7 asteroids what could possibly go wrong.

Well not a lot really, it was a very even game, the Imperials lost 4 Tie Fighters and managed in return to destroy two of the X Wings of the 423rd. Two however managed to escape so it was honours even.

Comedy moment came from the Empire as always, I was controlling 2 Tie groups and Steve the bomber / defender formation, however both of us thought that the other was flying the third Tie group. It was only when we revealed the manoeuvre dials and they shot off in all different directions we realised something was wrong.

Once again Captain Tangent went off on a err.. tangent and flew around at warp factor ten miles from anything and surprisingly shot nothing down, nine games and counting.

Very exiting was the introduction of our laser leveller used to determine fire arcs, sadly it didn't do ranges but that could be next. 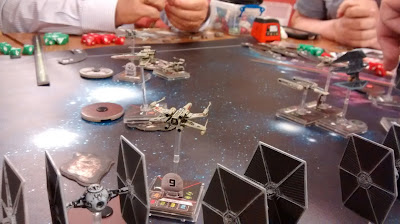 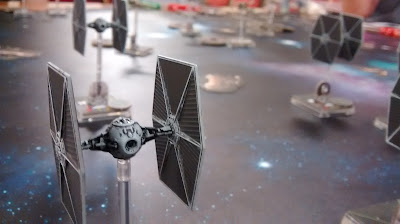 X Wing madness will return with game 19 on the 7th of October. A return to a planetary atmosphere for a battle over a mining facility. 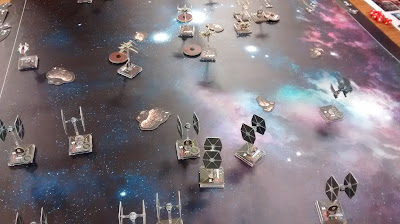