"Gentlemen, today we have a tough mission.

An undercover team of Empire spies have been found stowed away among three cargo ships in a convoy carrying new T9 Droids to the forward base in a nearby sector.

The crews have discovered the spies but being heavily outgunned they were only able to trap the spies in the cargo bays of the ships, as Empire Fighters approach the crew have abandoned their unarmed merchant ships.

You need to get in there and kill the Spies whilst not destroying the merchants, it won't be easy as the Empire will no doubt send a force to try and rescue their operatives.

W K Jnr bought himself a Plasma Cannon and Enhanced Canopy.
Pop Cicle bought Assault Missiles and a Shield Upgrade.
Everyone else saved, there is austerity after all.

Rebel players set up on the top right hand corner of the map in a range 3 sized square, place one Merchant Ship in the centre of the table and then 1 either side of it range 2 away. I would drop this to two merchants if less than five Rebels and add another for more than 8.


Empire Set up is 2 Shuttles (Random draw PS8 and PS6) each with Sensor Jammer and Anti Pursuit Lasers each with two escorting Ties (random draw, we had 3 PS 4 and 1 PS). Then two random ships each with an escort of two Ties. We had a guest player tonight, one Jon Wyatt who was given the honour of rolling the randon ship selection, 2d10, two tens ! We got a Phantom PS 7 and a Defender PS 3.

Each of the three merchants is assigned 4 red tokens representing the spies and 10 orange damage counters.


Merchants - They have been disabled and do not move. They do have 3 dodge dice to reflect the difficulty of hitting the spies.

Imperial Rescue - The Shuttles may carry a maximum of 4 Spies, other ships may carry one. To allow a spy to board the ship must be within range one of the Merchants base and travelling at Speed 1. A ship may load one spy per turn. The shuttle has a special ability, if it hovers (Speed 0) within range 1 it can pick up 2 spies in a turn.

Rebel Precision Shooting - The Rebels kill spies by firing at the Merchants, however only Critical hits kill the spies, any ordinary hits do a damage point. Once all damage points are gone the merchant is destroyed and the spies are out of the game for both sides.

Table Exit - For this game Imperial Ships are allowed to exit the table edge, if the do they miss a turn before re appearing at any speed or direction at the point they left the table. They may deposit any Spies on board to safety before returning to the fray.

Shuttle Escorts - These Ties are dedicated to supporting their Shuttles, they must remain within range 3 of their escort, it they are not they must K turn, tight turn or move at maximum speed back towards their charges.

There was a big turn out tonight with 7 rebels battling the Empire, there was a return for Brian who had been killed earlier in the campaign. As mentioned above we welcomed Jon into the Empire fold to help out myself and Steve.

There was quite a bit of negativity from the Rebels at the start who just saw the mass of Empire ships and saw defeat.

Initial spoils were even as both sides made towards the nearest Merchant, the Empire Shuttles had all 4 spies on board quickly and then gambled by heading for the table edge with 2 on board each of the shuttles.

Captain Tangent headed for the centre merchant but found it quite hot in his A Wing, down to 1 hull point he wisely punched the hyperspace button.

Rick O'Shea didn't like the odds and punched out, then changed his mind but it was too late as his hyperdrive kicked in on the first turn and he was gone.

Others were not so lucky, Spike Sharpie lost his shiny E Wing to the Phantom, W K Jnr lost his Hawk also to the Phantom and Baby Brian was shot down, thankfully all survived the dice of death.

It was a really close game, the Empire gamble failed in the end, mostly due to Baby Brian rolling two unanswered criticals in one throw killing two spies. As turn 10 ended the Rebels had killed 6 spies and the Empire had captured 4, one of the merchants went down with a spy on board meaning that a Empire victory was impossible.

It was also the first time we had used a Phantom, expertly handled by Jon who had used one before, what a great ship. 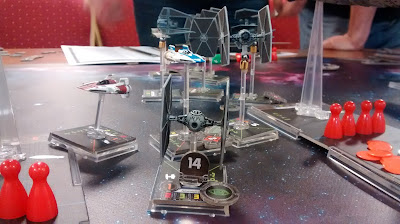 
Jim head mechanic in the Rebel Garage was advertising for help in the Yarkshire Twilight Post, 3 ships to prep for new pilots and a lot of stuff to fix.

X Wing madness will return with game 16 a battle over a plant surface at the end of July. 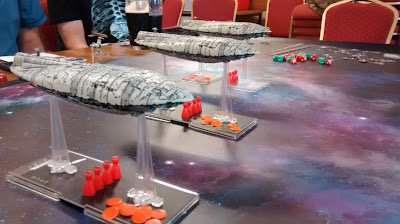